Jalisco is the Land of Tequila. One excellent option to experiment this delicious drink, is taking The Tequila Express and be part of a big festivity around mariachi, Mexican food, and of course; Tequila! in a beautiful Hacienda.
So definitely, once you’re in Guadalajara, just take the train and say Salud! (Cheers) and enjoy the trip.
posted by Unknown at 9:51 AM 12 comments

Is a place where one can have a nice chat with friends while a group is playing, artist read poems, others act in a play; or just red a book at the same time that one taste a delicious coffee or any other beverage or meal.

If you are planning to take some artistic courses this summer, one option is The Hospicio Cabañas. In this pic, we can see one of his 23 differents patios, and how easily one can be inspired in writing, painting, dancing, taking pictures or even watching a film or differents exhibitions that take place here.
posted by Unknown at 2:47 PM 0 comments 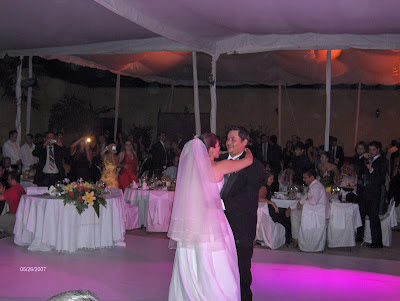 In all cultures, weddings are very important, mixing religious beliefs and tradition. Every country has thier own way to celebrate. Mexico, as a multicultural country also has very different ways to celebrate a wedding. Usually, as in many cultures, the bridge is dressed in white, and also there is a dance /usually with a banda playing a vals) where the couple dance alone, later with thier parents, and then with thier in laws.

Guadalajara also adds a particular characteristic to the weddings, the use of a marichi in the party.
posted by Dennys Sanborns (AKA Juan Cabeza de Vaca) at 5:57 PM 3 comments 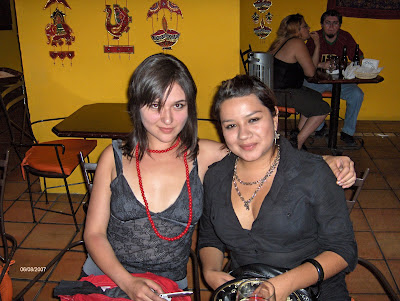 Two of my former students. Acording to Wikipedia, "People in Mexico is made of Mestizos (those of European and Amerindian ancestry) form the largest group, making up to 60%–75% of the total population. The percentage of Amerindians, called indigenous peoples (indígenas) in Mexico, is estimated to be between 12% (pure Amerindian)[47] or 30% (predominantly Amerindian). Ethnic Europeans make up 9% and 15% of the population, mostly descendants of the first Spanish settlers, although many have German, French, Italian, Portuguese, Irish, Polish, Romanian, Russian and British ancestry; many are found in major cities after the waves of immigration that brought many Europeans at the end of the nineteenth and early twentieth centuries, along with some Canadians and Euro-Americans from the United States."

The girl in the left is of Italian ancestry, but here it does not matters where your parents were born. Mexico is ethnically diverse, and the constitution defines the country to be a "pluricultural nation". According to law all we aere mexicans, despite our origin, and people consire themselves mexicans.
posted by Dennys Sanborns (AKA Juan Cabeza de Vaca) at 1:00 PM 2 comments 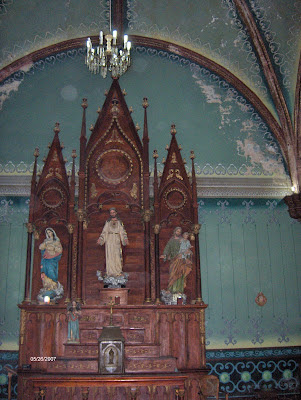 All mexican haciendas had a chaptel or a church, this is not the exception. This is a detail from the Ex-Hacienda Santa Lucia, close to Guadalajara. The place now is used for weddings, both, the ceremony and the party.
posted by Dennys Sanborns (AKA Juan Cabeza de Vaca) at 12:56 PM 2 comments 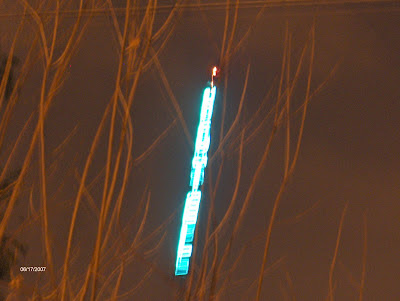 I always wanted to take the pic of this hotel, I dont even know its name but at nite the words "HOTEL" look really nice, unfortunately my pic was not so good.
posted by Dennys Sanborns (AKA Juan Cabeza de Vaca) at 12:51 PM 0 comments 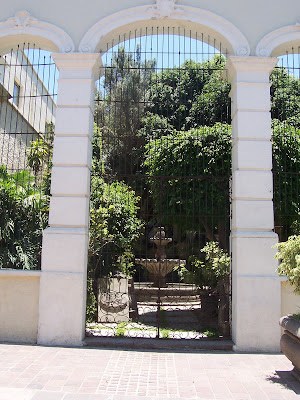 I wish I could get in and see that closer!!
posted by Liz Feliz at 9:09 PM 3 comments

Bottles in the... wall 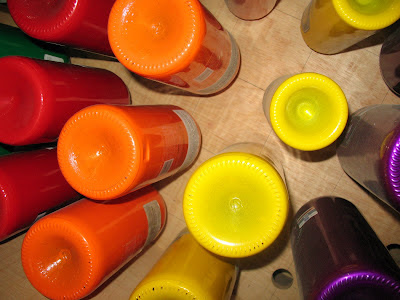 This is a pic by Sofia Lizarraga, a very good friend of mine. She captured this at la Mata Tinta Restaurant, in Tlaquepaque.
Colorful.
posted by Liz Feliz at 9:15 PM 2 comments 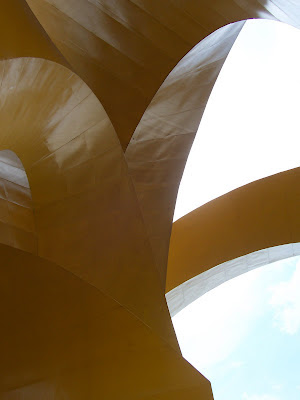 I know we have talked back and forth about this structure, but I recently had the chance to access under it, so here's what I saw!!

So many people (usually foreign ones) says that it looks totally like some creepy version of the McDonalds arches... what do you think??
posted by Liz Feliz at 11:11 PM 1 comments

Can you give me a ride? 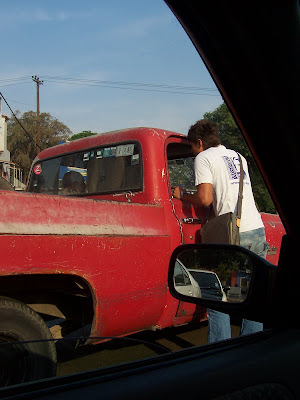 It’s not really usual that someone ask for a ride in the middle of the city, but who hasn’t been out of last cent to get the whole ticket price?? 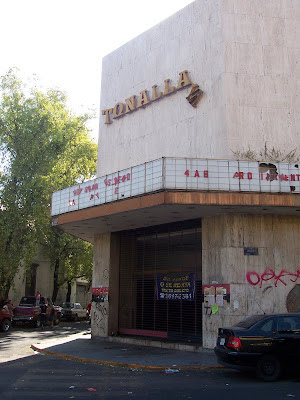 An old (and abandoned) teather on the "9 corners" neighborhood. It's so lame to have have spaces like this, and great people to perform and no money to make it a reality. 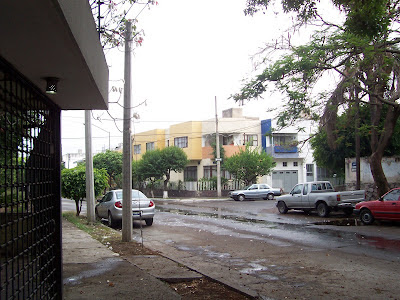 A couple of days ago, we saw the first drops of this year's rain season. I just love this, the first sights of wet streets.
posted by Liz Feliz at 11:23 PM 2 comments 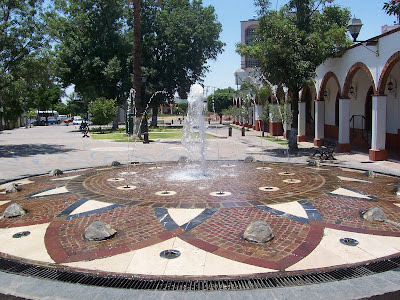 This is the Plazoleta del Arte that honors the city of Springfield, Missouri (sister city of Tlaquepaque)
posted by Liz Feliz at 10:42 PM 5 comments 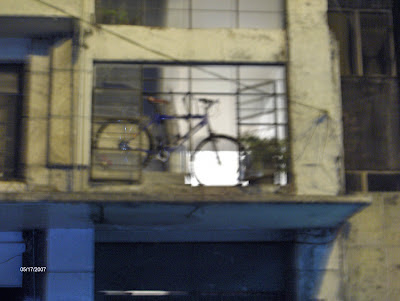 This bike is parked in the window of a stair. That nite Liz and I were walking in the street and she saw the bike, it was a good idea to have a shot of it. The owner arrived and look at us with an unfriendly face, so we just walk away.
posted by Dennys Sanborns (AKA Juan Cabeza de Vaca) at 3:07 PM 2 comments 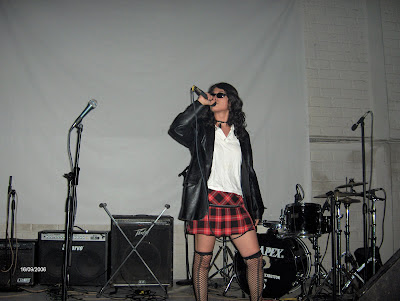 Joy is a good friend who likes to enjoy the life, here is singing in a concert with her band named "cherry blood brothers".
posted by Dennys Sanborns (AKA Juan Cabeza de Vaca) at 10:02 AM 2 comments 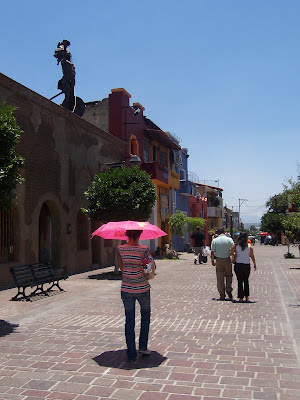 This is Independencia street, a pedestrian area in downtown Tlaquepaque (love the pink umbrella).
posted by Liz Feliz at 11:31 PM 1 comments 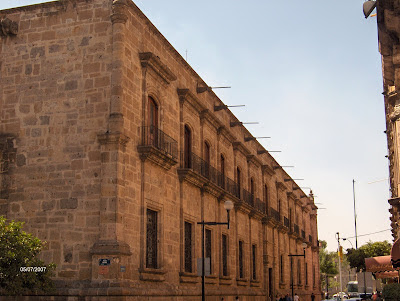 Usually our historical downtown it may seem not so ancient at first sight, but if you look carefully you may find some beautiful buildings such this one.
posted by Dennys Sanborns (AKA Juan Cabeza de Vaca) at 10:48 AM 0 comments 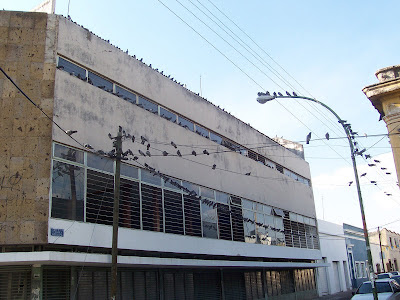 Isn't this just as seen on Hitchcock's movie?? That's just what I thought as walking by near Mexicaltzingo Market. Thankfully the just stay there as I took this shot. Enjoy. 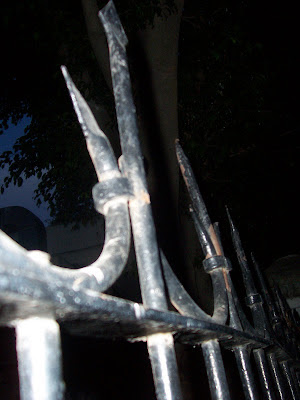 A dirty high side of an old bench at Prisciliano Sanchez St.
posted by Liz Feliz at 10:38 AM 0 comments

An (almost) everyday reason to admire the beautiful Perla Tapatia